Under Offer
Land, Other

The property is located in the City Waterside neighbourhood of Stoke on Trent; by road, it is approximately:

Lichfield Street (A50) is a regeneration gateway into the City Centre from the south. The surrounding neighbourhood has had significant investment using an enhanced public realm palette and the neighbourhood remains the City Council’s priority housing regeneration area.

The locality has seen the development of 100’s of homes in the last few years with 100’s more earmarked in the next few, in part under the City’s Housing Zone status.

Description
The property is rectangular in shape and extends to approximately 0.440 hectares (1.087 acres). It is bounded to the north and west by the Caldon Canal (a Conservation Area) beyond which are modern residential properties. To the east of Lichfield Street there is a mix of traditional and newbuild housing, commercial and light industrial premises and to the south, further industrial premises.

The property has recently undergone significant remediation with all in-situ concrete and the top couple of metres of on-site material removed to prepare the site for development to commence.

The property is considered suitable for residential development, subject to planning.

Services
Interested parties are recommended to make their own enquires. All mains utilities services are understood to be available, subject to any re-connection which may be necessary.

Planning
The property is located within the City’s Inner Urban Core which is identified as a priority area for regeneration and residential development in the Adopted Newcastle under Lyme and Stoke on Trent Core Spatial Strategy (Policy ASP2).

Outline planning consent under reference SOT/43249 was obtained in 2004 for the erection of 18 apartments and 12 town houses with infrastructure, car parking and landscaping.

The scheme proposed a ‘C’ shaped layout with units fronting on to the Caldon Canal and Lichfield Street. The apartments were situated within a four-storey block located in the north-east corner of the site whilst the three-storey town houses mainly fronted the Caldon Canal. Parking and garden land was provided within the ‘C’ shape and this area was accessed via the existing site entrance on Lichfield Street.

VAT
All figures are quoted exclusive of VAT.

Legal Costs
Each party is to be responsible for their own legal costs.

Viewings
Viewing is strictly by appointment with the Sole Agent.

A substantial end of terrace commercial and residential investment opportunity briefly comprising a self-contained retail unit together with rear store/workshop as well as a self-contained and separately accessed three...

The Spode Works is a former pottery site which has had significant investment to regenerate the site for a multitude of uses with extensive potential for further development and... The property briefly comprises a securely fenced and level parcel of land extending to 0.26 acres upon which is a detached single storey office and workshop unit of brick... 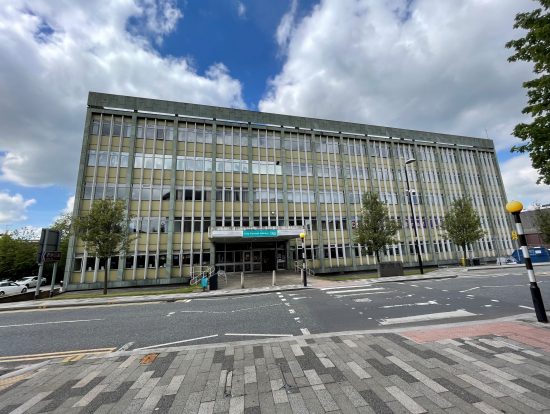 The availability of Hanley City Central Library represents a rare opportunity to acquire a large building adjacent to Stoke-on-Trent's prime regeneration area. Vacant possession is provided on account of... For Sale by public auction on Monday 26th July 2021 at 6.30pm. Live online bidding available.
An opportunity to purchase a prominent piece of land measuring c.0.53 Acres and... The availability of 25 Lonsdale Street represents an excellent investment opportunity. Currently configured as a ground floor café with living accommodation above, the property is well suited to be...